I Run to Conquer Cancer 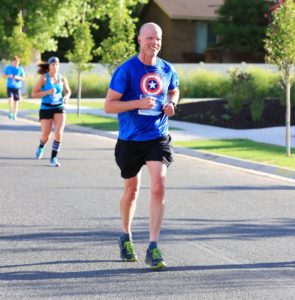 Right before the Dino Half, I discovered a lump in my neck. It slightly concerned me but what was I to worry about? I was a super-healthy, active runner. Nevertheless, I made an appointment to see my doctor and scheduled it for after the Dino Half. Because I had previously been relatively successful competitively in the Dino Half, I lined up at the start toeing the line ready to race. However, it was obvious within the first mile that something was very wrong with me. I couldn’t breathe and my legs felt extraordinarily heavy. I dropped far away from the lead pack and eventually finished but felt horrible. Something was definitely wrong.

I went to the doctor the next day which, after visiting with other doctors later and having the lump excised from my neck, ultimately led me to the discovery that I had Stage 4 Non-Hodgkins Lymphoma and my body was enveloped in tumors. I was shocked. No amount of life experience can prepare you for the words “Cancer”, “Stage 4”, and “chemotherapy.” The CAT and PT scans showing images of tumors left me feeling betrayed by my own body and utterly devastated. As someone who took care of himself and ran nearly every day, I couldn’t comprehend why this had happened to me but I was determined to fight it.

I began 8 months of chemotherapy and immunotherapy. On the days I felt well enough to do so, during treatment, I would try and get out and walk or lightly run but it was an immense struggle and my cardiovascular was shot due to the treatment.

Fast forward to now and I am in remission! I’m not the same runner I once was. I can no longer run with the lead pack but I enjoy the race the same. I know that I’ve won a much bigger event, one that doesn’t come with medals or podium visits but one I celebrate with much greater fanfare for me and my family. I run because doing so reminds me of the times when I couldn’t run, when the race was against the clock of mortality, one that was quickly counting down, and not the simple uptick of a finisher’s timing clock. I run remembering those who were with me at Huntsman and those who still are. I run because even the aftermath of a bad run beats the aftermath of chemotherapy. Cancer has forever changed me. It alters everything about who you are. It robs you of your identity and upends your entire world. Running, even though it too had changed for me, still helped provide a modicum of consistency. I’m grateful that the Timp Half supports the Huntsman Cancer Institute. They are wonderful people doing life changing work there.

In some ways, I can say that running saved my life but actually that honor truly goes to the wonderful care I received from the loving staff at HCI.

Stay up to date on our upcoming races, price increases and get notified of special deals.
Sign Up >

5 for the fight cancer conquer cancer COVID-19 huntsman cancer Run of Remembrance runtastic runtastic events Timp Half
This website uses cookies to improve your experience. We'll assume you're ok with this, but you can opt-out if you wish. ACCEPT Reject
Privacy & Cookies Policy

Any cookies that may not be particularly necessary for the website to function and is used specifically to collect user personal data via analytics, ads, other embedded contents are termed as non-necessary cookies. It is mandatory to procure user consent prior to running these cookies on your website.