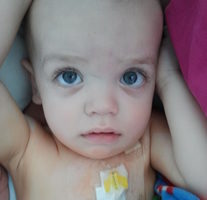 This story was shared with permission from Griffin’s Family, learn more and find the original story post on their blog.

Griffin was born a healthy baby with no health issues or concerns, but soon at only three months old he developed a softball sized mass attached to his bladder, a rare form of cancer called Rhabdomyosarcoma. 7 years later and cancer free, his family supports him by running the Timp Half Run to Conquer Cancer, raising Awareness for Children’s Cancer, and being examples of strength for others. Here’s their story:

I started running about 5 years ago as an escape from a lot of mental, emotional and physical fatigue that my son’s 3 year battle with cancer took on me.  I had never ran before but haven’t stopped since.  I am really looking forward to running Timp this year because of the amazing cause it supports that is so close to my heart.  Griffin and the many children battling cancer are always in my mind and heart pushing me forward when I run.  Being able to mesh my passions of running and fighting cancer into one event is pretty amazing.

I run for Griffin, who do you run for?

Griffin was born a healthy baby with no health issues or concerns. At his 1 year checkup everything looked good. Only three months later that changed. We noticed he had a bump sticking out of his side when he leaned back and that his tummy was firm. We initially thought it was a hernia or something similar and took him to the doctor the following Monday. An ultrasound was done and a large mass was found in his abdomen. We were told to take him immediately to the local children’s hospital an hour away. After several tests, scans and a biopsy he was officially diagnosed with cancer. That mass was attached to his bladder and was the size of a softball. At the age 15 months old Griffin was diagnosed with a rare form of cancer called Rhabdomyosarcoma, there are only about 350 kids diagnosed with Rhabdo each year in the United States. Since the bladder itself is a muscle, there was no way to remove it surgically without removing his entire bladder. Our hope was that the chemo and radiation would shrink the tumor and kill all cancer cells and not have to go into surgery.

​​Griffin spent that Easter in the hospital getting his port installed and his very first chemo. We also spent that visit learning how to care for him: Proper way to give him shots. How to correctly access his port to administer fluids, chemo and antibiotics. How to properly dispose of chemo, needles, ect. How to safely handle wet diapers and other bodily fluids. Wearing gloves when changing a diaper, washing any clothes or bedding exposed to bodily fluids two times or more. Even what actions to take if he got a fever while not in the hospital (No Tylenol, if fever of 100.3 more than hour go to ER, if fever of 101 go to ER). One ER visit he was given an antibiotic that he had an allergic reaction to and his entire face swelled up.

​​Many nights he woke up in the night screaming inconsolably. Being so young and unable to talk made those times very difficult. There was even a period of about 5 – 6 weeks in a row where an antibiotic was hooked up to him 3 times a day for an hour at a time. This caused diarrhea which in turn caused severe diaper rash in which we couldn’t get rid until he finally got off the antibiotics. When his blood counts were low we had to administer a Neupogen shot in his arm or his leg for days at a time. He spent almost all of his time either at home or the hospital. We had to be very careful where we went with him due to his immune system being too low or non-existent.

​​He underwent 44 weeks of chemo (64 doses in total), 6 weeks of daily radiation (Daily sedation), numerous ER visits, CT/MRI/X-ray’s, more hospital stays than we can count and hundreds of homecare nurse visits for labs and checkups. At times our fridge was full of Antibiotics, chemo, and Neupogen shots. But in the end it was worth it because the tumor had shrunk to the size of a golf ball and showed no signs of disease. He was declared to be in remission the following March. His port was removed and we hoped that would be the last surgery he would ever have. We were ecstatic and grateful and ready to move past this and very excited for him to be a “Normal” kid and experience life outside a hospital. He would go in for a CT scan, X-rays and Labs every three months for follow up. 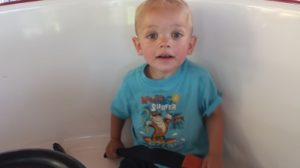 ​About 5 months later Griffin started to wake up in the night in pain. For fear of the cancer returning we pulled up his scans by a month. The initial CT scan didn’t show any growth or anything really noticeable but Griffins Oncologist wanted to follow up on one section to be safe. So a PET/CT scan was scheduled. Griffin was sedated for 45 minutes while the procedure was done. When it came to getting the results both of Griffin’s oncologists and social worker came in. It was not standard for the social worker to come in so we felt like something was wrong. They told us the cancer had returned and we were absolutely devastated. Long story short he started his second battle with cancer right away.

Griffin started another battle with cancer that lasted from August to the following March. It began with an EKG, Echocardiogram, Bonescan, ultrasound bioposy, bone marrow biopsy and then his port placement. ​

​After a relapse the options for treatment start to get smaller and hope of beating it become smaller. Griffin was in for a much rougher battle this time. He had much harsher chemo for one. One in particular had to be taken after medication to protect the heart was given, and is only allowed to be given a certain number of times in a lifetime. Every few months an echo-cardiogram was given to ensure that his heart was still healthy. He even had some chemo that would make him really upset and frustrated. Add being stuck in a little room for a week at a time, tied to a pole with tubes going in your chest, you can imagine how difficult that would be.

At this time we were also told that Griffin would need to have what remained of the tumor removed and that he would most likely lose his bladder. We were EXTREMELY fortunate that when it was time for surgery that the tumor was attached to a part of the bladder that didn’t control bladder function. The tumor and 40% of his bladder were removed during a successful surgery. He was able to retain all function of his bladder and are told his bladder should stretch out to close to a normal size. After a painful two weeks in the hospital Griffin started Chemo again. Once the chemo knocked out his immune system again his incision from surgery got infected and went into surgery again to have a drain put in and he was put on antibiotics again. A few weeks later another infection flared up from his incision and a larger drain put in and more antibiotics. Once that cleared up he finished up his chemo and after a scan showed no disease he had his port removed again. Fortunately, after the successful surgery it was determined that we could stop chemo several months early. ​

​Griffin has maintained a regular scan/checkup schedule of every 3 months for the first year, every 4 months for the second year and every 6 months for the next few years. The oncologists feel very confident that there is No Evidence of Disease and our focus has now shifted on how the side effects of the treatment will affect him as he grows. Things like sterility, bones not growing, heart problems and other health issues. He continues in remission enjoying life, laughing, dancing and smiling. 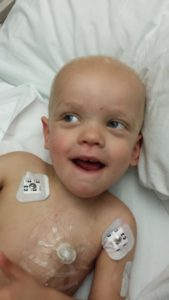 Thank You Travis for sharing your son’s story with us. Find out more about this amazing family and their efforts to raise awareness for children’s cancer on their blog at https://www.team-griffin.net/

The Runtastic Timp Half: Run to Conquer Cancer

Runtastic Events with be working hand in hand with charity 5 for the Fight as we put on the 2019 Timp Half. 5 for the Fight raises money for cancer research at the Huntsman Cancer Institute. At least $5 from every registration is donated directly to the charity and of course the option is given during the registration process to donate more to support the cause. Aid your fellow runners and community in the fight to conquer cancer; join the Timp Half Run to Conquer Cancer and fight alongside us